Kate Colby on Her Work--About “A Banner Year” 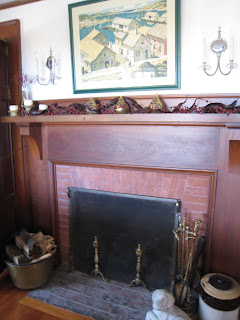 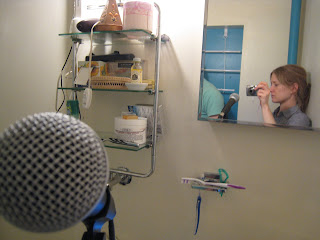 I was asked to give you some context for this work, and if forced to encapsulate, I’d say it’s about place—in both the local and abstract senses—and about a place—where if these walls could talk they’d sound just like this. When I began the poem I had an idea that one way I might be able to “be here now” is to triangulate back from where-else I’ve been—to travel the longest distance between two points—“Six Degrees of Kevin Bacon,” to the Nth degree, only starting and ending at myself.

A recurring image in my work is that optical illusion with the black grid on the white field and the fuzzy gray dots at the interstices. When you try to look directly at them, they disappear. Now consider this sort of illusion as optical preference. If I stare down the things crowded in the corners of my eyes, can I create a fuzzy space or place for myself at the center.

I come from a traditional New England family of the formal Sunday-dinner sort. We’ll
talk about anything but what we’re talking about, then have a few cocktails and forget both. Textbook Puritan derivatives, my relations tend to be parsimonious to the extreme, which manifests in a practical anti-parsimony principle when it comes to the material, where time is infinite and resources are discrete. When my great aunt Dodie died, among other effects found in her decrepit Providence manor house was a box labeled “Pieces of string too small to be useful.” My parents will drive two towns away to cheaper grocery and hardware stores than those near their house. I joke they’d drive fifty miles for cheaper gas.

I’ve inherited from them this notion, albeit taxed, that time confers no advantage because we are all in it.

Though “A Banner Year” isn’t a narratively autobiographical poem, I’m going to tell you a little about where I grew up. During the school year my family lived in Wayland, Massachusetts, which is 20 miles west of Boston. It’s a small town that broke off from neighboring Sudbury and incorporated in 1780. It was known as East Sudbury until 1835 when it was renamed for the president of Brown University, who was a benefactor of the public library. As a child, I was within biking distance of Walden Pond, The Wayside Inn, the Alcott’s Orchard House and the Concord and Lexington battlefields. My very dear and shamelessly Anglophilic grandmother often took me and my brother on picnics at what’s known locally as the Rude Bridge. She could describe Paul Revere’s Ride and the Revolution as though she’d been there and had uncomplicated allegiances to both sides. There was a small museum there where one could dress up in period costumes, with mobcabs and three-cornered hats. There was an exhibit about the long-gone local Native Americans into which I don’t recall ever having been. My grandmother was also a great fan of a certain prelapsarian variety of Anglo-American poetry and could recite Robert Louis Stevenson, James Whitcomb Riley, John Greenleaf Whittier, Lear and Milne from memory.

The rest of the year and on weekends we lived in a small Ipswich-Bay-side village called Annisquam, which is in Gloucester, Massachusetts. Gloucester is a culturally diverse industrial fishing city that’s been partially commandeered by Moonies. It’s more widely known for being atmospherically saturated with old-salty seafaring imagery and the kind of romantically evocative art and literary history that’s propping up both the town and the New England sea trope’s hold on American self-identification. Winslow Homer, Fitz Hugh Lane, Kipling, Longfellow and Eliot depicted Gloucester fishermen at sea, and a local fishing shack has been the subject of so many quiet works of art it’s known as Motif #1. Longfellow’s “The Wreck of the Hesperus” and Eliot’s “The Dry Salvages” from “Four Quartets” gave some liminal shape to my adolescent consciousness.

From the turret of Hammond Castle one looks out over Norman’s Woe toward Eastern Point and the Salvages beacon, out of sight range in the distance. So, the sea becomes the soul of man and the widow’s walk the woman and her career of overlooking. Charles Olson, whom I read after having left Massachusetts, later tried to play both roles, obviating the woman all together, which is, perhaps, why he is virtually unheard of in Gloucester. Gloucester loves its binaries.

These two places where I grew up and was educated figure prominently in “A Banner Year.” Other places include France, Thailand, Sunday School, ballet class, Civil and World War narratives, and the California-Mexican border, which are other places in which I’ve spent some time. Together, they are only a relative and incidentally plotted selection of points, and they come equipped with equally relative personal and historical information.

A few years ago my husband, Rusty, and I were driving back from Baja through the sparse and dusty partially militarized region between Mexicali and the Salton Sea and were amazed by the number of bright-green border-runner paddy wagons cruising up and down Route 86. And every few miles there’s a sign warning you that a 50s-illustration-style Mexican family might be holding hands and running across the road. An hour or so later we were in Palm Springs and its kitschy cultural in-jokes, which made me wonder if being “American” isn’t to an extent more about the ancillary information that’s stuck to the values we all are supposed to espouse. What if the information supplants the values? Is this our Antiques Roadshow status quo? What information makes you American and where did you get it?

I recently looked up the INS Citizen Test questions, some of which are—or should be— highly interpretive and are narrowly value-driven and a lot of which I haven’t been able to answer since high school. “A Banner Year” is another citizenship test of sorts, asking where have you been and what information was imprinted on you there. How has that information affected your vision?

Do you know the story of Typhoid Mary?
Who, exactly, was Mata Hari?
Name three works of M.C. Escher.
Have you seen the Muffin Man?

The poem is about place, the center of which is the San Francisco kitchen table at which I wrote it. It’s covered with a striped tablecloth, there’s an antique-map calendar on the wall, and an enormous pink rosebush outside the window, which my born-again Christian landlord has to regularly get on a ladder to cut back. There’s also my partner and patient sounding board, who grew up in Massachusetts and Florida, where he learned about Ponce de Leon in school, and who is often sitting at the kitchen counter or cooking or working in the next room. As distinctions in time and between places disappear, I feel a compulsion to mark them, even if only as fuzzy gray dots in the corner of the eye.

Finally, the poem is about movement. And adaptation. How if you stare at or consider anything too long you cease to see it. And this is why I wanted to read this poem before leaving California. I’m about to move back to these places I’ve considered in this attenuated manner, and I don’t think I’ll ever be able to see or address them this way again. Soon I’ll be able to consider California—and I do mean consider in the sidereal sense—to write like punching backlit holes through tin.

I was trained as a dancer and in this poem I try to write like a dancer—to create muscular movement in language—and to never stop moving, to almost stop thinking, and to repeatedly catch myself in the corners of my own eye.

Accordingly, the poem begins with the following epigraph from “The Dry Salvages”:

“…where action were otherwise movement
of that which is only moved
and has in it no source of movement.”


Read more about Kate here
Posted by Amber DiPietra at 2:17 AM