what I missed at the Open Embodiment conference--well, I missed a million things, but sleep remains my biggest arts practice

Heather Barrett's experiment at FLUXX on being a slime mould. Here is her TEDTalk.

"When it meets itself, it knows it is already there and turns back, to grow in other directions."

I always wanted a pet slime mold in a dish, when I was a kid. How could I not? I grew up with GhostBusters. and in proximity to so many hot retention ponds. Heather passed me the lime green flyer and asked if I planned to stay, but alas, it was late at night, I was jetlagged and my colleagues who shared my hotel were nuclei, pushing our cell membrane back across the desert, toward the Marriott. I did not want to travel alone. Who stayed to become slime at FLUXX? Did someone "make photos", as Petra would say? A mass cell selfie?  Join the international slime mould collective!


Anthony Wagner--the gorgeous Austrian who came to sit with me on my double bed/the body poetik's random intimacies installation at the Solar Culture gallery. I heard Austria and wanted to exclaim, My middle name is Vienna! But my brain gave a blip for all the energetic charge and  I could not really recall if Austria was the home of that city. Anthony said he followed me back to my bed to inquire about sexological bodywork, what it was, did he need it. But really, later, when he and I got to the public spooning portion of the installation, he told me he followed me because I was a non-normative girl wearing a quite attractive neon coral negligee.  So, I felt in that moment, that my experiment in obviousness made the right point (I had worried the wearing of lingerie did not suit performance art...gesturing too heavily, and thus falsely, toward intimacy). Anthony was wearing a mermaid tank top and he studies monsters in trans culture. Of course, we talked about the monstrous in disability culture and my one blind pearlescent eye, which stands out to people, these days, far more than any of my other "aberrant' physical traits". I love Anthony.


The other trans person who is a scholar of clowning and sat with me on my bed...why do we fear clowns, why do we fear sex? They are both so absurd and over the top, but really, the art is in the subtle. And that is where we get back to the deep play and the gift. But yes, I missed out on getting his name...It was an excellent conversation.


Oh also, Natalie Brewster Nguyen doing her acro-performance art in the gallery next to mine. I mean, for the record I was not asleep when I missed this, but otherwise entranced, as was the case above. Here is one of the pictures I borrowed from her Facebook. 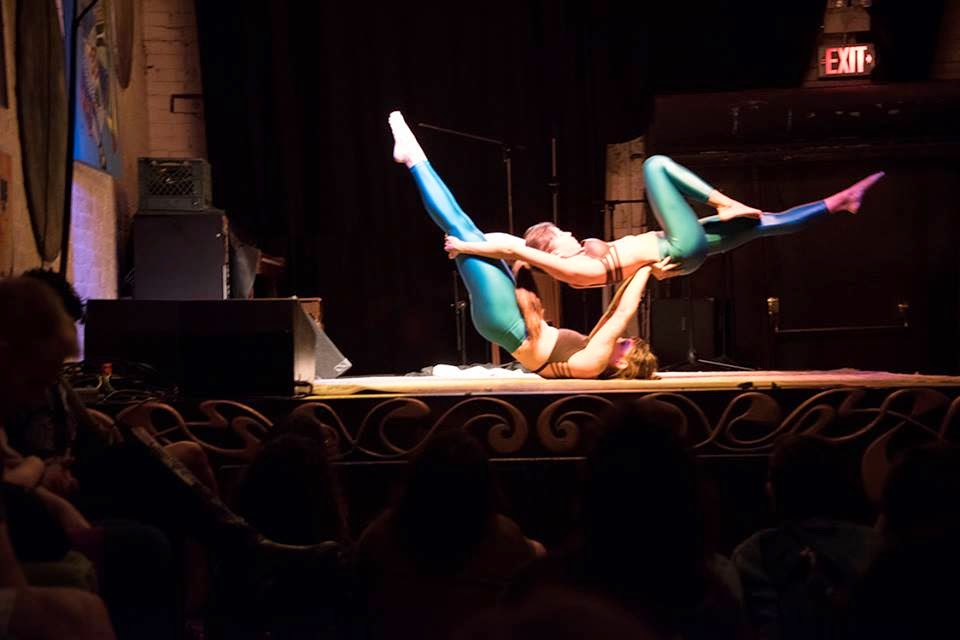 I missed about a million things, including a visit to Casa Libre, but I presented 3 times and had to store up energy to see a bodpoe client on the last evening...it is important for me to see clients in other states so I can better know body/landscape relationship. He drank iced tea and told me about his work with propane tanks, until kidney and lung issues put him in an early art retirement. Soon, he will be making farm animal murals out of multi-colored corn kernel. We listened to Neil Young for an extended period of time. We attended to the very act of comfort and my Fox and his ferrets.