Seminole heights, if it has sidewalks, is where I would like to live

Seminole heights sans the heights, with a lot of Spanish moss and low-lying sponginess, as if the limestone was just inches below the dirt. here we are at a park in Seminole Heights. Dad saying where are the drum? No drums at the Friday night concert, but an unplugged version of Indigo Girls Galileo and then, Walking in Memphis. A moment of feeling very at home. These songs never sounded so the same, so good. 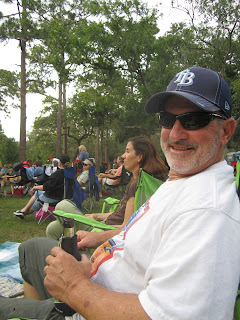 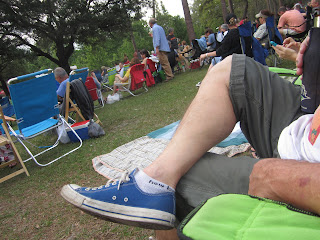 (Dad's shoes. At some point, in the 90's, his band had a Converse endorsement or sponsorship or some such thing  and he had the high tops that were pre- Target knock offs. But his drum kit, i think, had to have the Converse logo spray painted on it.)

The park concert is actually, at the Lowry Park Zoo. Where there was once a semi-circular concrete stairway painted to look like a rainbow. Not a 1980's rainbow, but a 1970's rainbow. 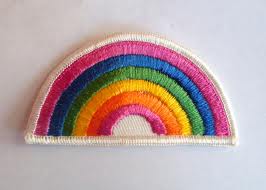 Dad or Mom, or some other strong relative would carry me up the rainbow and into the park where hippos lived behind chain link fences. My UV blindness caused me to trip over a chunk of tar dried on the sidewalk near the ferris Wheel and had a hematoma, but I think I still saw the dusty, poop smeared elephant.

Now, my little brother walks up in a tight grey wifebeater and skinny jeans. He gives me his coveted smart phone with the flashlight feature turned on so that I can be safe in the ptich black, mosquito infested port-a-potty. Night blindness and public toilets. Implores me not to drop it in, but sounds otherwise brave and chivalrous. It is likley he has gotten the part in the high school kids' adapation of Little Shop of Horrors. He says his friend's mom asked him why I would move back here from San Francisco. There is no way I can create a good enough arc in as few sentences  as would be appropriate, to be shouted through a port-a-potty door to a 14-year-old I adore.

Posted by Amber DiPietra at 8:06 PM