send me a catalog 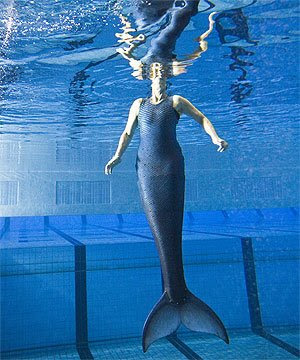 Nadya Vessey lost her legs as a child but now she swims like a mermaid.
Ms Vessey's mermaid tail was created by Wellington-based film industry wizards Weta Workshop after the Auckland woman wrote to them two years ago asking if they could make her a prosthetic tail. She was astounded when they agreed.
She lost both legs below the knee from a medical condition when she was a child and told Close Up last night her long-held dream had come true. "A prosthetic is a prosthetic, and your body has to be comfortable with it and you have to mentally make it part of yourself," she said.
Ms Vessey told a little boy: "I'm a little mermaid" when he asked what happened to her legs and the idea stuck.
Weta Workshop director Richard Taylor, more used to winning Oscars for visual effects from movies such as Lord of the Rings, was delighted to make it happen.
"She was very patient. We haven't always been able to fulfil some requests. We were engaged in it pretty quickly because it was a challenge."
Weta costumer Lee Williams, who worked on the suit between film projects with seven other staff, told Close Up she "wanted [Nadya] to be beautiful and sexy".
After seeing Ms Vessey test the tail in Kilbirnie pool then frolic in the harbour, Ms Williams was stoked. "It was absolutely amazing. It's beautiful to watch Nadya swim and to see that dream come true and to be a part of that. I feel quite blessed."
The suit was made mostly of wetsuit fabric and plastic moulds, and was covered in a digitally printed sock. Mermaid-like scales were painted by hand.
Mr Taylor said not only did the tail have to be functional, it was important it looked realistic. "What became apparent was that she actually physically wanted to look like a mermaid."
The fact that she did something so simple, that she permitted herself the simple decision and act of mailing to ask for the tail is the best part of all. Confirms my recent beleif that New Zealanders are the most interesting people I still have yet to know.
For my part, I did not even go to the pool today. A frustrated applicant, unsure of the parts I ordered. Paperwork as the new body-making. How do I apply myself? Fill in what form how...In the blanks, i wrote about my little ipod in its wetsuit so that v. woolf via librivox and the indian woman, a stranger in the next green-beige lane said You are so brave! not knowing Night and Day underwater is a talisman against any weight in my pockets. Functionally, its the neck that makes me hesitate--not sure I can lift my nose above the surface at the moment i want to. But the functional is an underly for the overlay which becomes huger and more persistent. There's no real exterior threat or danger of physical failing--just an internal leak. because the phantom self come with me, glides up under my belly and just as soon dissolves because it is not needed to pull me through any kinesthetic acts as on concrete. With it suddenly gone, a loss of pressure in the container, a fissure in my head and water seeps in. I too hate metaphor--though I settle for it in the same way I use the phantom self--to pull off things of mediocre ease(=beauty?).
from Bhanu's blog:
It was calming to type up these commands. I typed them from scratch from the bottom of the form. As I said, it settled the part of me that has to understand the form and then to act. Thinking of hybrid vigor, of heterosis, of the flair and aggravated red of the blatant field-mouse, the wronged mammal who is nevertheless functional/attractive/the one who gets to go to the AWP [that didn't make any sense/but I liked it!]: and how hybrid purpose is eviscerated, sometimes, by what it takes to fill in the form to become hybrid.
Who can fashion me a spout?
Posted by Amber DiPietra at 11:20 PM