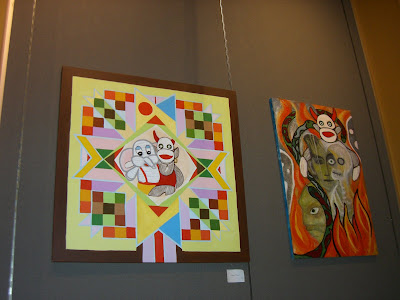 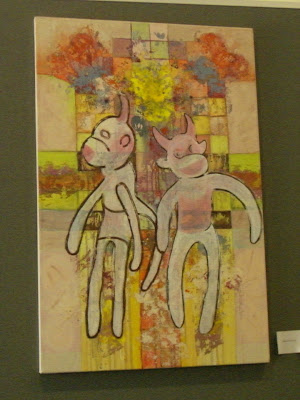 If you missed Jan's "Creatures" show, you must not miss her sock monkey exhibiton here! It is called Day of the Darned, I take it, because it coincided with the evening of Day of the Dead in SF (Nov 2) and thus made for a tough choice for loyal fans of Jan/regular attendess of Dia de los Muertos processions. I shamefully missed it, but will be sure to catch it before it ends--on NOV 20. 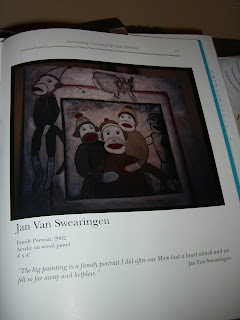 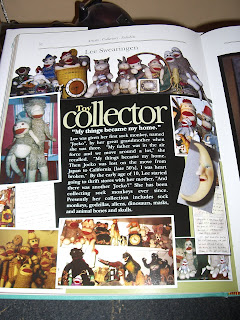 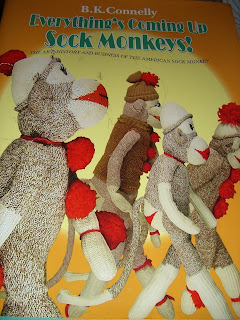 My friend Jan is a local (San Francisco) painter who renders cowboys and madonnas with Godzilla heads. Back in the ‘80’s, she worked a receptionist in Tampa Florida at the salon where my mom was a hair dresser. I usually hung out in the back room of the salon, coloring and reading the parts of Cosmo I shouldn’t have been reading at age 9. I believed Jan was Cyndi Lauper. She wore slips to work that she bought at Goodwill (the good Southern kind where things are still cheap and varied and the apparel comes straight off some dead old lady’s back) and she would grow her hair out long, dye a strip of it pink, then give herself a pixie cut and pin that pink strip back on now and then when she felt like it.

Jan has a sister Lee and when I was a little girl, my mom took me to a Lee’s house—it was some party Jan invited us to. They had toys there—tons of toys, but not like the Mattel kind of stuff I was familiar with. More like the strangest most wonderful curiosities from a bygone era. Lee had had the same kind of arthritis as I did (do) though by the time I met her, hers had abated (as it does in some people). Jan always told the story of how Lee, who was the older of the two, got thrown out of the house as a teenager for smoking pot. Her ex-military Midwestern Dad just could not abide by it, though it is very possible that all that pot was as a good a pain medicine as any. Lee’s boyfriend came to their house and carried her down the stairs from her bedroom because she couldn’t walk then. The house Lee had as an adult, the one I visited years ago, was an old creaky Florida kind of wood house with all those crazy dolls in it. And it smelled like incense and rich foods and art.

The Van Swearingen sisters recently had their socky debut in a coffee table book (images above).

You can see more of Jan's paintings on Myspace.
Posted by Amber DiPietra at 6:36 AM

Labels: my projects and writings, shadow box and collage

straight off some dead old lady's back, LOLOL!