the blink is here! 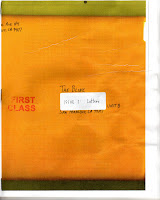 Letter from the Editors


The name of our zine comes from a passage in a story Lexi wrote:

A verb needs an image, an action to get its power back. A good story needs to blink. I realized today why video doesn't have the same power as film and that is because video doesn't blink. In film, there are frames separated by imperceptible but undeniable darkness. Like eyes closed. Video doesn't have this of course and so there is something less human about it, less natural in the looking. It's the same with records versus CDs. There is just something in that crackling that is closer to the true experience of listening

We have often felt hemmed in by the constant demand to communicate. The Inbox is drained by evening only to brim again in the morning. The ominous and silly little bwoop of an incoming email demands immediate, efficacious response, some pleasantry exchanged to firm up the details, close the loops, get on the same page, etc. “This is my letter to the world/That never wrote to me”, Emily Dickinson wrote, but what happens when one lives in a world where everyone is constantly writing to everyone else in the form of blogs and via list serve? Dickinson may have never received a reply from the world, but in her lifetime, she wrote dozens of poems that ran like perfect, intricate machines. Meanwhile, one feels that the best idea for a story slipped away somewhere between a text message about dress sizes and a barrage of cc’ing re: funding ideas for outreach—all of which amounted to some colons and parenthesis to express emotion and a string of unfiltered half thoughts blasted to a large batch of employees.

As editors, when we first started discussing ideas for the zine – the extinction of species like handwriting, paper, and telephone booths – we feared we would sound like “hippie luddites” rallying against mass communication via the internets and modern technology in general. But our wish was never to decry IMing and cell phones. Far from it. It is not technology that is driving the imperceptible darkness between frames into extinction—it is rather, a pervasive immediacy muddied by urgency, an attitude of smooth and hurried efficiency one assumes or takes on.

Blinking is done in the instant of Refresh, when your mind goes blank while clicking the Send/Receive button on Outlook, having just finished reading an email from a friend who moved away last summer to write legislation, one proofreading mark at a time, in a far away southern state. She is never that distant however, in the real time of office work, which transcends variation in function and proximity.

I got the package today. I can’t imagine what my actual birthday present will be! I get off in an hour and I am going to get tanked at a knitting party and make a penguin for my Dad’s birthday.

Did you get the emu bookmark I put in?


Blinks are the long waiting between letters one receives from an aunt, the black sheep like yourself perhaps, who is in divinity school in some brittle winter state. Blinking is in the loop of the L and the collapsed oval that tops off the e at the end of the night when you’ve settled your mind long enough to make a few notes in your journal--only to find that your hands registers the act of writing, after hours at the keyboard, as something like a kind of wobbling, a hyper sensation, an awkward and delicious scratching along. These paper moments arrive at you, via a red stamp and some wavery lines or rustling along a leather spine.

In creating this zine, we wanted to step out of the fracas of daily communications (including and especially the ones we zing to ourselves; to do/to do/to-do/Don’t forget!) by attending to all the blank spaces around the myriad details therein. Things used to get recalled, celebrated, mourned, and mulled over in letters. They were static, discrete documents that took time to reach the reader. One could not be distracted from the text at hand by hyperlinks. Paper grain lined up with the grooves in finger ridges. They had weight—however ephemeral or subjective or random in content. For this reason, we wanted the zine to be made of staples and ink. It did not need to exist as an online literary journal. I recently read a treatise in a techie periodical on why even software programmers crave Post Its. “Paper is in the room with you.” (Make Magazine. Vol. 14. Life Hacks: Death to Paper).

It is our hope that the blink zine, beyond this first Letters issue, will serve as a letter box for its readers. Maybe your letter box is an old icebox, with greeny metal that is always gently oxidizing in the corner of the apartments you have inhabited. Maybe it is the kitchen drawer that gets yanked open and slammed shut everyday, in the frenzied search for pens or keys or lists. Maybe it is a file in your email account that sleeps a grey white sleep when you are away, but looks back at you brightly when you open it. At any rate, it is the place where you toss and stuff and carefully place the things you were in a rush to convey or receive and now slow to forget. Perhaps you will the satisfying noise the pages make when you flip through them. “There is just something in that crackling that is closer to the true experience of listening.”

So I finally (you rest your case) got round to reading your editorial piece and loved it. Perhaps everything is gradually coalescing towards 2012 as so many have predicted. Many more people wanting to go more slowly, to breathe (inspire), to savour the flavour of life in its day by day manifestations. To live and be aware of living.

Have good times and thanks for The Blink