these are photos of the Tampa Bay Area in the winter. Except, usually the day is quartz and if it is cool at all, it is the coolness of a wetness low wind off the already heating bath that is the bay. Her his a photo of a garden party filled with strangers, that i tried to attend. Something about my persona is magnetic to people. The me on the internet that men want to have sex with, for free, let's say. Or the me fronted by the merle chihuahua in my "wheelchair" proud and received to be hyper visible, hide behind b a guise of circus-of-two. I have somehow become famous on the internet enough to be so lonely, in the way that celebrities are. But I have skipped the parts in which I wrote a novel, or gave a great performance, or did important community organizing for AIDS. Which is to say I know a lot of things and I think a lot of things...too much, so much it is unbearable to think them because they are just tracks in the head and they interfere with very simple first-upon-waking things like getting up to go pee, or making cup of coffee, or letting the cat out on to the balcony where she can pee in her box.

But this photo was to say, because I was voiceless and pained like I have not been since I was 12, at the garden party aforepictured 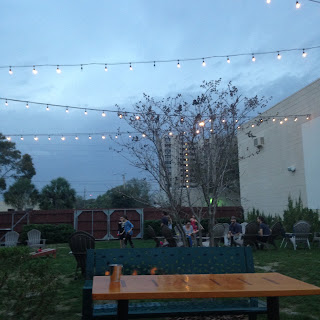 ...the old adage or the thing that people from small towns say...If you don;t have anything nice to say--talk about the weather. Personal translation: If you are terribly, heartachingly bored, and worse than the boredom, the shame embedded in the experience of this emotion: bored as moral failure--the world needs help, find some resources and apply them somewhere; bored as a failure of character--boring people get bored; boredom as artistic failure--because you have failed to really live in the space of your art; boredom as a threat to survival--how long can you wake up everyone morning and feel, nothing. 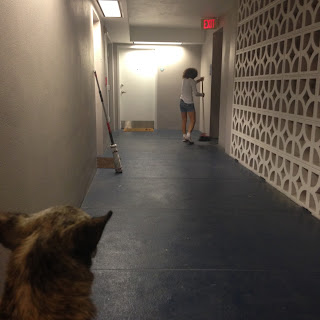 Here is a photo of my mother toiling outside of my apartment. She combats boredom and fear by being powerfully clean and efficient. If I would just do things like sweep every day, I would A. not have a disgusting floor and B. Have yet another pebble of a task to fill my echoing bucket. I am not saying this to slight my mother. It is the truth. She is not bored, or seldom consciously, and I would clean like her if I believed in my own physical efficacy. But she achieves that so much better than I.
My efficacy is that of a soft, white cheese. Motionless, a bit foul, erotic, only a crusty sort of person can enjoy it in small bites. I can sell toast and jam, i can, but am not fed by it. 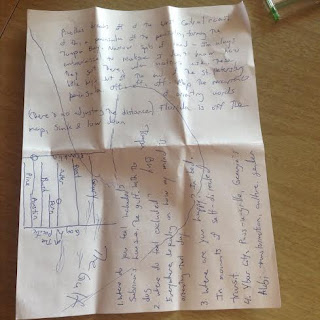 Sabrina Dalla Valle has pointed out that I am terribly crusted. This is a somatic fact, as my entire skeleton is a series of burrs, bursitis.  That i had to get practical to save myself, but now I am stuck there. (i don;t tell the story of "recovering' from Xanax and sex addiction, because it is a long story and it is not what is usually meant by telling the recovery story...Above is map i drew in her this Saturday, her gorgeous Urban Construct, in which I was not bored,but mapping and listening and sneaking peeks at the maps next to me and saying hello to Betsy Alvarez, who says her struggle is that she is an accomplished graphic designer who believes in the power of energy medicine, but often gets lost when diverging from the linear. This information comes in, penetrates fat and plasma and sinew and makes a sound against my sternum.