Crunched down in the big, sunny, soft, tropical, albeit medical model landscape of Florida, trying to find the right niche (to carve is labor so tedious and complex it almost defeats the purpose of trying to dig into a mellow, allowing small pocket/niche for a simple life), I can only revel in Sunny Taylor's article that Michelle Puckett sent to me. Go here and read it:
http://monthlyreview.org/2004/03/01/the-right-not-to-work-power-and-disability

But here are some big chunks I adore:

"Disability, in contrast, is the political and social repression of impaired people. This is accomplished by making them economically and socially isolated. Disabled people have limited housing options, are socially and culturally ostracized, and have very few career opportunities. The disabled community argues that these disadvantages are thus not due to impairment by its nature, but due to a cultural aversion to impairment, a lack of productive opportunity in the current economy for disabled people, and the multi-billion dollar industry that houses and “cares” for the disabled population that has developed as a consequence of this economic disenfranchisement. This argument is known as the social model of disability.5Disablement is a political state and not a personal one and thus needs to be addressed as a civil rights issue."

"Marx and later theorists have shown how capitalist development has privileged certain biological forms of embodiment (for example white able-bodied males). Because of this, it is important when trying to understand the impact of space on bodies (for instance inaccessible buildings and transportation), to consider who is forming (and has formed) spaces and who inhabits them. The extreme inaccessibility and alienation felt by impaired people may not be a natural consequence of their own personal embodiments in the twenty-first century, but instead a complex system of historical, cultural, and geographical discrimination that has evolved inside and alongside capitalism and that we now simply regard (and too frequently dismiss) as disability. Crippled and elderly people have an especially precarious relationship to the machine that is production and consumption. People work hard, they age, their efficiency inevitably lessens and, unless they are fortunate enough to have some savings stashed away, they are too often put in nursing homes where their new value will be as “beds.” As Marta Russell has astutely pointed out, the institutionalization of disabled people “evolved from the cold realization that people with disabilities could be commodified…People with disabilities are ‘worth’ more to the Gross Domestic Product when occupying a bed in an institution than when they’re living in their own homes."


"What I mean by the right not to work is perhaps as much a shift in ideology or consciousness as it is a material shift. It is about our relation not only to labor but the significance of performing that labor, and to the idea that only through the performance of wage labor does the human being actually accrue value themselves. It is about cultivating a skeptical attitude regarding the significance of work, which should not be taken at face value as a sign of equality and enfranchisement, but should be analyzed more critically. Even in situations where enforcement of the ADA and government subsidies to corporations lead to the employment of the disabled, who tends to benefit, employers or employees?"

And the image that goes with the article, a self-portrait of Sunny (who is a painter): 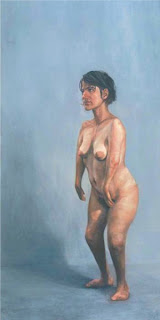 Just what does she think she is doing, affixing her naked self to a scholarly, political article on the body, disability and capitalist worth? Being a fucking genius, I say.

In a sort of related vein, am artistic statement by me about some of the erotic performance work I did in CA, work that used my body just as it it was/is  (in a slightly different person of my own disabled self) may be on it's way to appearing in the Oxford Journal of Dance and Well Being. I made a lot of money doing the performance work (though the risks outweighed the gain). However, the value of the essay in which I may appear, with other disabled performance artists on the fringe--that is priceless.  Now to remember that and re-channel that energy into my current job search.
Posted by Amber DiPietra at 8:57 PM