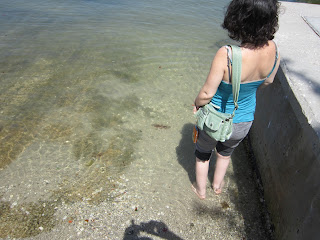 My first day of college, by the briny Sarasota bay, I met a girl named Martha who spent most of her time in an old oak, during the ice cream social. When she came down, she looked at me and said, I do see a toad in you--the freckles on your face. She disappeared a few weeks later and I always think of her. 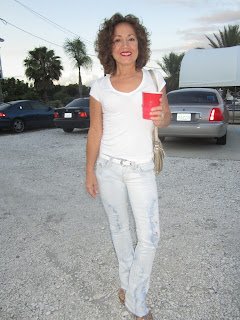 Red Solo cup, Rick's on the River, the ubiquitous Born to Be Wild Cover, the old toothless guy at the bar who asked me and Reese which college football team we were for. 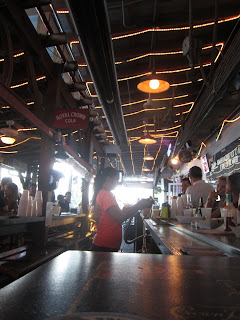 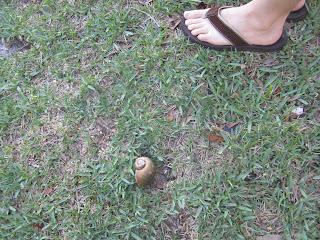 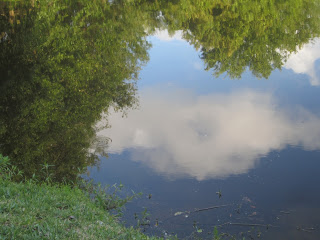 Jovan does not believe the retention pond in Mom's back yard contains gators. But they do migrate. Come and go. Like the way otters appeared, in the deep middle, crossing, and then gone in the brush, gone.  And sometimes you see the flat, prehistoric-looking soft-shelled turtle and sometimes you only hear the snake bird, whose caw is even more like a crank than the yard geese. Maybe the sound radiates down, and scares the fish up into his avian-serpent's beak. 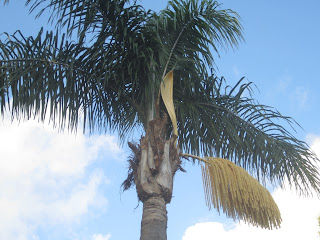 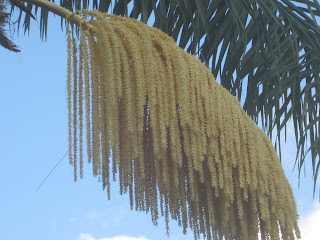 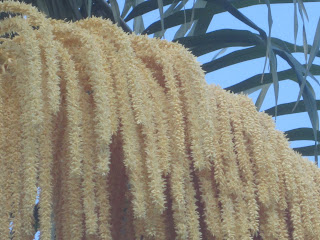 Is it shameful that I do not know the names for common things, in the landscape that is so climatized (though not necessarily traversable) to my body? Or does that make sense? Inger Christensen tells me, in Grass, that words insist on "procession", whereas Florida, and the arthritic body, insists on fluid stillness.  I google "palm tree pollen frond" and find an article that tells me, due to climate change, Antarctica was once covered in palm trees. It is still cold here for May. Disturbingly so. It gets down to 60 at night. 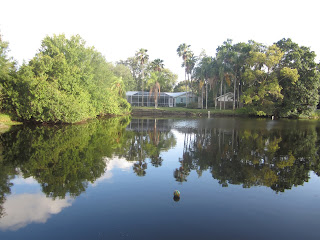 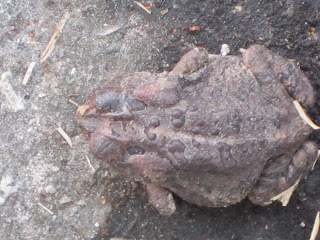 Sapos ahumados, is what goes through my mind when we see the little American toad in the cul de sac gutter beside Mom's driveway, last week. I poke him with my toe. He feels dry, rigid. It's playing dead, the way my pet toad, also an American (because having a bufo in the house was dangerous), played dead on my bedroom carpet, at 4am, when I was in high school. This was pre- rat and yellow-bellied-slider. He got loose because I had to take my hand off of him to spoon out the mealworm pupae we stored in the refrigerator. If not kept cold, these pupae would turn into big-ass buzzing beetles, in minutes, I believed. So, I always hastened to get them back in the fridge. In my hurry, the Wet Sprocket got away and started doing a wild hop toward my erotic Celtic novels. I trapped him between my calloused crooked feet. Pre hip replacement, there was absolutely no bending over. (Once, there was that other time, at the Days Inn that my college had converted to dorms, behind the overgrown RV lot. The buzzing sulfur light. Puerto Rican night at the adjoining Ramada pulsing over the crumbled concrete wall. Crouching, my stripper friend and fellow postmodern lit student, helping me to catch and hold toads.) Toad in the gutter from last week got truly desiccated just a day or two later, lost some dimensions to a tire.

I am wanting this blog to be something else. To return to writing about somatic poetry, disability culture, something. But there is mostly jus tthis porch, for now.

The porch I wanted, to begin again to figure anything out, or just to feel.   Jason [Phydras] writes, on http://tract-trace.blogspot.com that prose allows for time, for the sentence to become poetic as it "wanders far afield" and also, takes on a quality of "suddenness".  I have descended to a part of the country where I most come from, that is nearly below sea level, that defines disability as only developmental. (Ok, maybe that is wrong--but there is a lack of specificity in "professional" or service provider speak, a way in which other types of disability don't get seen...or it has to do with naming only what can be funded...I don't understand it yet and I am not sure I want to.)

Swimming, horizontally, is difficult with a rigid neck. I lack the presence of mind to practice with a snorkel. Feel conspicuous among the children at their YMCA swim lessons *the pool on this shaded porch is not swimmable, due to the strangely cold May. Luckily there is the hated one at the Y.). It occurs to me that when/if--with a baby in there, I will be a tiny, walking swimming hole. How I want gills, and to sit quietly, inside myself, on this porch. But to become non-verbal and push off too, into my own air, beyond the screen. 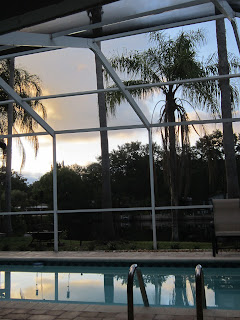 Posted by Amber DiPietra at 7:35 PM