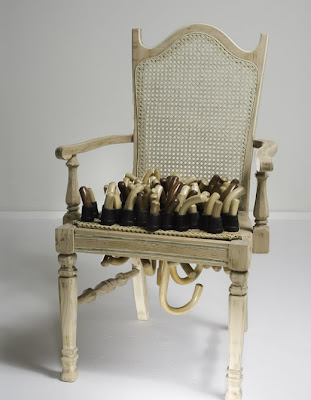 Here is a bio of just one of the artists in the show. I chose to highlght this one because the material (mined from the body and then remade) makes most sense to me in terms of my own experience. And because of the word "scurs", note the footnote, which alings with my idea of the imapcted, the wear-detritus which becomes the fossilized.
Harriet Sanderson describes her installation Molt, with Scurs as “…a private bedroom type space, a retreat for the person with chronic health problems, from which emerges, finally, an individual presenting herself to the ‘normal’ world. . . the daily ritual of resurrection begins and ends in the private space of the bedroom-dressing room.” For Sanderson, a woman with post-polio syndrome and fibromyalgia, Molt, with Scurs, explores the dilemma of having chronic physical pain that requires certain accommodations that are not visibly apparent to other people. The conflict between either constantly ‘outing’ yourself publicly, or privately experiencing pain, is one that people with invisible disabilities know all too well. This conflict between the public and private, the visible and invisible, are manifest in the dualities present in Molt, with Scurs, where mattress pads are both resting place and medium, the seat of the chair punningly constructed with woven cane and then covered with pieces of canes. The tips of cane seated on the chair, and scattered around the room, seem to take on a life of their own; themselves disembodied from their usual role as walking devices, at rest, their “heads” bend inquisitively, almost tenderly, in multiple directions. There’s a personification of these typically medicalized objects, a beauty, and a distinct eroticism, in their arrangement and placement.
*Scurs are incompletely developed horns which are generally loose and movable beneath the skin, not attached to the skull. They range in size from small scab-like growths to occasionally almost as large as horns.
Visit the NIAD Gallery to view more artists (March 31-May11 2009).
The National Institute of Art & Disabilities (NIAD) will present the first exhibition to address the intersection between disability identity and female identity in RE/FORMATIONS: Disability, Women, and Sculpture, organized by the Van Every/Smith Galleries at Davidson College in North Carolina. On view from March 30 to May 11, five female artists, four of whom are disabled, will exhibit sculpture that examines disability not as mental or physical insufficiency limited to a small minority, but as widespread and diffuse cultural identity, like race or sexual orientation. This is not art as therapy or rehabilitation. It is art emerging from within disability culture that is at once activist and aesthetically innovative.
RE/FORMATIONS fills a critical gap in the national discussion on disability. Why is it important that the disabled and non-disabled women featured in RE/FORMATIONS explore structures of normalcy – bodily, sexual, gendered, sculptural, a medium that traditionally demands physical strength and significant financial means?
Exhibition note: NIAD artist Lacee King will be featured in place of Rebecca Horn for the duration of RE/FORMATIONS: Disability, Women, and Sculpture at the National Institute of Art & Disabilities.
To read more about to RE/FORMATIONS project nationwide, including a critical essay by Professor Ann M Fox and a video of panel discussion with artists (featuring Rosemarie Garland-Thomson), read here.
Posted by Amber DiPietra at 12:12 AM