And an answer to my recent mermaid post?
/a song for the body water chamber/
a pair of salt water/lungs for the under water/choir
[not original spacing] 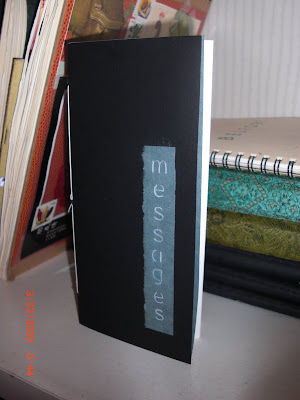 Tiff Dressen's life long goal is the synchronization of her left and right brain. When not consumed by this you can often find her peregrinating between Oakland and Berkeley . She is the author of a chapbook Keeper (from Woodland Editions) and two chapbooks books of poetry As deer in aurora Borealis and other poems from the astral bestiary and Fugue: for Alan Turing (from Jaybird McQueen's, stealthy elf press). Some of her poems, reviews & essays have appeared or are forthcoming in 26: a journal of poetry and poetics, Five Fingers Review, Xanthippe, New American Writing & Outside Voices Anthology. She is one of the curator's of the Canessa Park Poetry Series <http://canessa.blogspot.com/> , travels to the Cyclades http://qb3.org/index.html> . She's member/editor at Kelsey Street Press.

Posted by Amber DiPietra at 2:09 AM