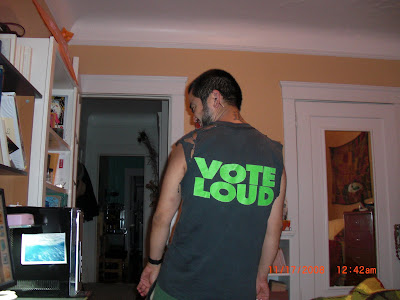 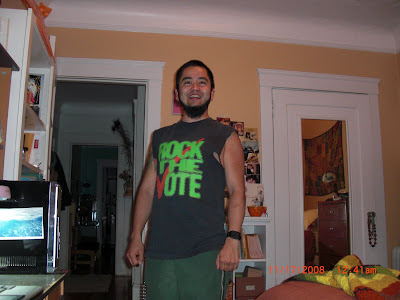 K and I did not go out last night, though it was tempting since people in the were spilling out into the streets, standing on top of cars, shooting off fireworks. Instead, he and I sat with our glasses of wine in front of my computer (hey M, at least I did not say NPR—I know boug-city) watching CNN.com. Watching the crowd in the long moments before Obama came out to give his victory speech. Most of the people the camera panned to were so absurdly happy, so wildly goofily human—dancing to Stevie Wonder—at least a dozen of these displays made us teary before Obama even came out on the stage.

Then I listened to this:

If there is anyone out there who still doubts that is a place where all things are possible; who still wonders if the dream of our founders is alive in our time; who still questions the power of our democracy, tonight is your answer.

It's the answer told by lines that stretched around schools and churches in numbers this nation has never seen; by people who waited three hours and four hours, many for the very first time in their lives, because they believed that this time must be different; that their voice could be that difference.

It's the answer spoken by young and old, rich and poor, Democrat and Republican, black, white, Latino, Asian, Native American, gay, straight, disabled and not disabled….

Posted by Amber DiPietra at 3:03 AM