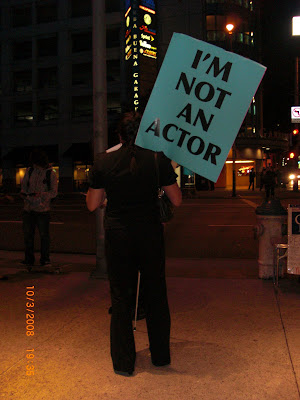 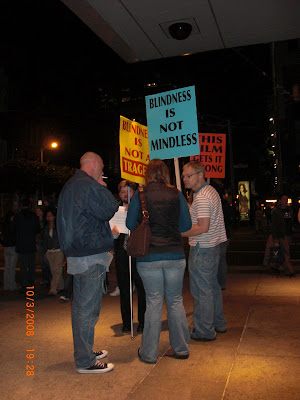 At the Metreon in San francisco last night, actvists from the National Federation for the Blind protest the new film "Blindness" based on the novel by Jose Saramngo.
In these images, visaully-impaired protesters carry signs that read I AM NOT AN ACTOR and BLINDNESS IS NOT A TRAGEDY.
This was one in a series of nationwide protests of the movie. In artcles about the issue. the film maker has been quoted as justifying the allegroical use of the blind in this way:

Meirelles told The Associated Press at Cannes that the film draws parallels to such disasters as Hurricane Katrina, the global food shortage and the cyclone in Myanmar.

"There are different kinds of blindness. There's 2 billion people that are starving in the world," Meirelles said. "This is happening. It doesn't need a catastrophe. It's happening, and because there isn't an event like Katrina, we don't see.

In the attempt to make some tidy and poignant statment on global catastrophe, the film makers have opted for a gross simplification of a theme and risked further marginalzing a group of real-life citzens. It just sounds like stupid storytelling to me. If you want to createa parable about food shrotages, why not use metaphors for the kinds of hunger that exist in the human heart> if you want to tell a story about blind people, why not investiagte the cutting-edge ways the viusally-impaired use technolgoy and what that may imply about human potential. I am not not even so fond of the latter (an over-delaization is as bad as a shoddy allegroy), but either would be an imrpovement overe the film, surely.

Posted by Amber DiPietra at 2:43 PM