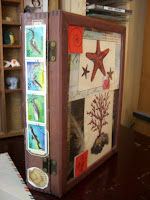 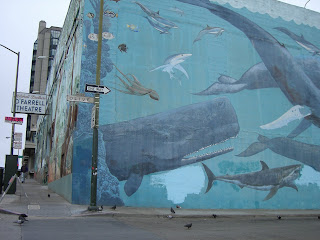 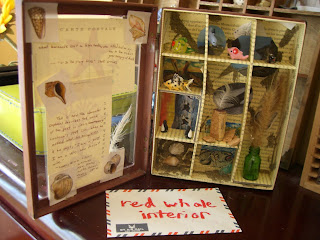 This is the poem I started for you before you moved to Austin this summer. The shadow box I made for it is all droopy with glue. I hope all the little things survived the mail.

“The whale that was stranded in London’s Thames River died today. Rescue workers were in the process of trying to transport it and the whale suffered convulsions from being out of the water for an extended period.” [The BBC, 01:02:34 GMT]

How it entered the mouth—and then got lodged upstream. In an impersonal LED of “clouds and collapsed tunnels underground...hung their bodies over a bridge on the river Euphrates...scientists say snails conserve energy”. The bottom dropped out of the vowel sound in “whale” when she said it—just for the slightest moment. Not just a Briticism on the a, but a resolute picking up of the word at the ends of its two syllables and watching it go limp in the middle.

Picture it from the air. As with a camera in David Blaine’s box (the stale weight of a guppy illusionist and his human feces tube cantilevers this comparison). While the dirty river drips away

from another shuddering grey plane. Huge wet underside, the color of an inverse oyster shell. Interrupted by a network of cables. This suspension is analogous to how it drowns, upwards from us. In an architecture of palpitations and Escher scaffolding. Dangling from these cranes,

all the red whale interior like in joie_de_poulpe’s story. Maybe we’re talking about the same inside place, with just the grid tilted a bit. I wrote a poem a long time ago, sitting by the Sarasota bay. White sky afternoons of hurricane season. Something about moist clots/pocked and hollow like/stepping into an/old lady’s

/mouth. It was part of the charmed life I lived then. I would die the old woman I had always been, bones bent as storm trees, dressed in yellow, on the poor sulfur water side of a rich Florida town with dispossessed friends and the Days Inn bar. Around the same time, I dreamed a haggard and toothless

Virginia Woolf teaching me to fish. Standing on the end of the rickety pier, its spindly wooden legs and her line chinked through the surface of a low still tide that shone, an expanse of metal beat flat and thin. Larger fractals for the oily silver in her eyes and hair.
I light a match. Push the boat into the river with my hands. Years later, the Pacific foam roiling at my feet. Invisible whales migrating north, like the stars a daybreak. I try to remember that version of water. I can’t.
--- The Vertical Interrogation of Strangers, Bhanu Kapil

“Things happen and happen I’ve started with the feeling I start so rarely that we’re already gone and looking back on only remembered beauty of the City.”
--joie_de_poulpe.theblinkblog.com

I wanted to end this with something about a nautilus. (Not only because of the “us”. But also, the twisting staircase in the aquarium you went to in France and the woman who fell. Our own weak knees, cartilaginousness, and LX’s toe which persists in hurting her, but is still harvesting joint fluid for me. We think; there must be a port just under the skin where her toe can plug into my tibia. So much else to explain, as always. The anecdotal is a living fossil, spiraling out far after it happens.) However, for now, there is just this. Imagine my surprise when I found it. Beached in the Tenderloin, how it gentles up the street.
love
amber
Posted by Amber DiPietra at 4:30 AM