here is hair, Flavor Blasted, at the beach

There is small, round toddler at the Sunset Chateau. Belonging to one of the winter people, the Canadian renters, I guess, because no one here gets in the Gulf until June. She looks like a delectable little sausage in her neon purple bathing suit--her hungry little butt has devoured it's bottom end. Atop her head, a messy "waterfall" of hair pouring from an elastic font.

Ty John rescues her kite and boasts about it long afterward. He also shows her a giant iridescent angel-wing oyster shell he found. Here he is, resisting the me and my photos, with superhero goggles on. 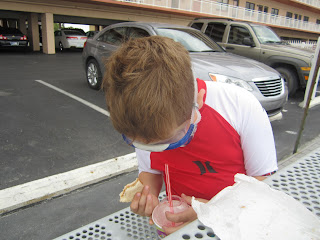 Here is his mom, my Reesa, trying to get him started on a sand castle so he will lay off the Flavor Blasted Goldfish. When he goes, I grab the Goldfish bag and start in myself. Reesa's hair makes an angel wing in the wind. 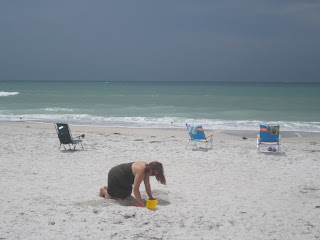 Jovan is trying to grow his hair out, Brazilian soccer-player style, so he can pull it back into a man-bun. He grew up in San Francisco, so he goes into the Gulf on this cloudy April day and calls it refreshing. 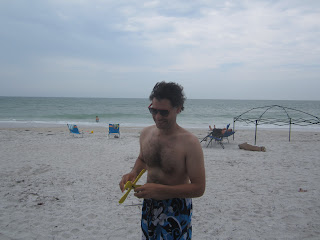 Here is a "pony tail palm". An anemic, tiny version of this one used to live on my windowsill in San Francisco. The calico and shark known as my Meme enjoys eating its leaves and puking it on the pavers, after she has hunted lizards mid-morning. 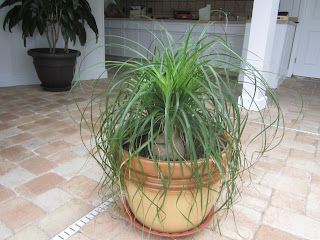 Posted by Amber DiPietra at 8:15 AM