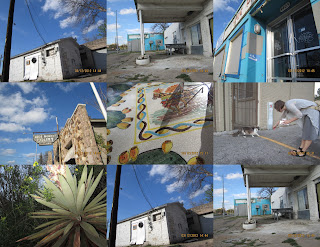 in which, I did not go to SXSW, but researched the bees that entered and exited St. Rita’s mouth while spending long hours with gelato martinis at Melanie's internet cafe (while she was proofing for the TX legislature). i spent more time in a cafe than i ever do in the Bay Area, it was like an alt. hipster writing residency and a new field of internet dating research. my main goal being to re-immerse myself in the world of  Poulpita (Melanie) and the Bassturd (Dan).  Sorry to say I did not see his last iteration as such, light refraction glasses, Christmas lights and keyboards (his po-mo version of Pink Floyd planetarium shows, like in Ames and Tampa). Bassturd who is now becoming Bumping Uglies. BU formed around the Austin School for the Blind, a fact that I love. I did not actually get to see them perform either, but did get to see Dan in keyboard-stance-trance several times (click on the link view it yourself) around 4am, when the poulpe and I were in margarita pitcher/enchilada platter/chicken in white gravy with a side of three of other white sauces comas. 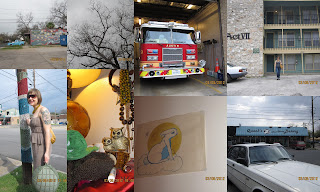 and because they are locals, they were super down on SX, kind of, unless they could've seen the Insane Clown Posse, and mostly i was entertained by music in their living room.  also, went to Elysium & everyone refused to dance to Come on Eileen with me. that night, on the way into dark 80's night, we heard a Springsteen cover of “I’m on Fire” Zydeco-style in a parking garage, 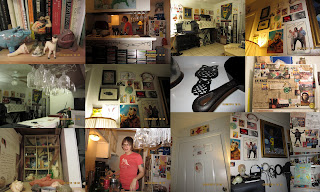 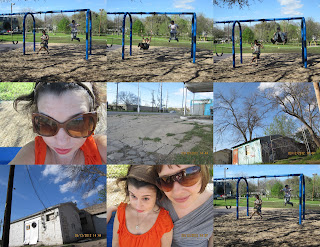 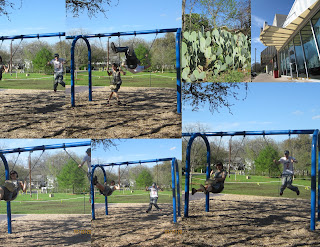 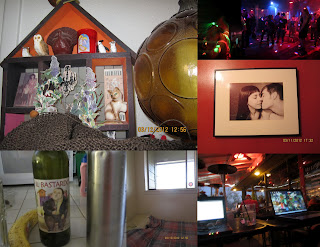 At Dolce Vita, I am surrounded by internet daters. One man in his late 40’s with a button pink floral Western shirt. He plays the trombone, his father was pastor, he believes deeply in Wayne Dyer.  His date is a professor of organizational psychology at UT Austin. She nods and asks him very thoughtful questions. He, in turn, asks her nuanced questions about her program, her students. They are trying so hard to hold space for each other. At one point, the truth comes out a bit, “Well”, she says, “I admire your courage---I wouldn’t have patience to be on X dating site for 5 years.” And he says, “And I thank you for coming out. I was watchin’ a documentary the other night and it says that people spend an average of 6 hours a day emailing each other through dating sites, but little of that amounts to face-to-face meetings.” Truth being, they will never see each other again—but they are very kind and very lonely. I want to cry for them and laugh and dance around there tale and go on a road trip with them.
Later, at another table, I hear this:
"Look at the cute girl in the red coat", says the older woman with her Southern accent, “
“Look at that handicapped bird”, says her date/husband(?).
Well", she says, "one legged, but he’s still got two good wangs."
I’d formulated a distressing fantasy. I wanted to be moved from one point to another in a hermetic sort of vessel
A treacherous walk across the freeway in the rain, that runs straight back to Ames (Melanie, the poulpe tells me), we make it to Domy Books. Where I find punk erotica zines that explain a lot to me about possible body image directions I could go in.
I’m still Iowan at heart and want to see in every direction, but let some directions resolve themselves the way they do around Tirtagangga
(In this bookstore, the most John-Cusack-movie thing happens to me. I hear a voice beside me say something like, “Hey, I’ve been meaning to talk to you.” I look up and say, “Do you work here?” “No,” he says, “I am the manager at Dolce Vita…” It’s a moment. We agree to mail each other our zines. Maybe he approached me with the hope that I could be some kind of passenger pigeon and hew oculd tuck his new zine into my wing, as a means of getting it back to San Francisco. But, it doe snot come out until the day I fly back. We exchange addresses.  My own tiny private little SXSW, in which he is not old and does not come from the internet.
Melanie tells me of unwanted attentions to Bali: "I very tactfully repulsed the gentleman."
a teenage girl we see just briefly in the rest of the text. It’s unusual in that it’s written to be read aloud and also in that I think it’s very good. 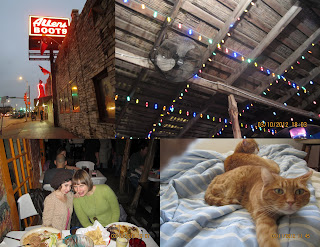 The parade dogs all wore antler headbands.
eye of the grackle, Casio keyboard inked on the forearm, promoted to the boy's dorm where they don't smear poop
water courses through stone channels and fountains and carvings of animals and gods that watch and expel it 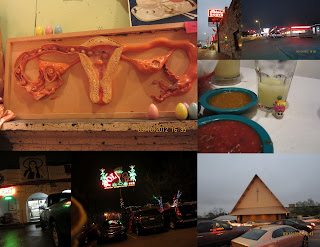 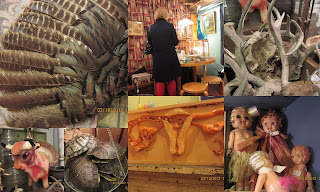 Listening to Kanye or Falco (or was it Suicide?) while Melanie knits, waiting for our ride. When she is not immersed in textile production,  she is working on stories about horses and deer. Leggy, swift mammals such as I love. Like her.
[The creek runs, freezes, floods. I can see every living thing and when something moves toward me I stop and watch it and it can't see me because my fur is the same color as the hill. My neck is lean and flexible. I'm energy. I run and jump. The ones of us who die give energy. Last year, I stopped eating all meat besides birds. I told Grandma it was because I was almost a teenager. She laughed and said fair enough.
Notebook. The chair that is a repurposed deer. Leather floor. Leather wallpaper. Leather picture frames. And its craftsmanship. Flies. 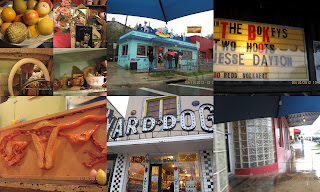 .
hold the big  fat hot exotic state as
rock and weather not accountable for its politics
a land in which hipsters are kinder, or at least they say y’all and have better tattoos. Or, I guess, their skin is exposed more often because of the climate
To use some Texas points of reference, they look somewhat like Willie Nelson, but with fur of a more vivid red, and they move like rock climbers.
Continental Club, Merle Haggard-meets-Lawrence-Welk. So in love with all the dancers, pairs of all ages. A Latino looking-grandfatherly man picks me, I know he is going to pick me in the instant just before I actually really see him walking over. He says, “I bring my 90 y/o mother here every Sunday afternoon. Just follow my feet.” He gives up on me after 30 seconds and lets me just kind of freestyle old-school hiphop it, while he twirls me and does a very good country two-step or some such thing.


WingzUp next to Nails of America in the strip mall. Chicken and waffles, drive-through style, while toe nail flakes are going everywhere.
and a short one that emerged almost fully formed after writing elliptically around its core 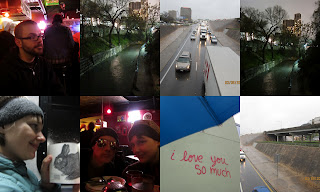 Oh yeah, it was Suicide’s Ghost Rider. On this trip, I should mention, there was no ghost riding the smarte carte while snowed in to the aeropuerto, but I was unusually golden on the plane. I had commiserated with the people in the terminal who were LEAVING Austin as SXSW started. We sat around at a bevy of tables in the middle of the walkway, while a band planed between gates C8 and C9, big banners hung up behind them exclaiming, Welcome to SXSW! And, despite the fact that I was covered in green mush while in a solipsistic eating frenzy with the best guacamole chicken sandwich ever and a 9 dollar shot of Jameson, two people were charmed enough by me to buy me additional drinks, such was the feeling of charitableness. Or maybe because my pores were leeching the sonic opiate sparkle synth of Alan Vega. All combined to equal my star-studded calm on I realized that despite my attempts to master local methods I smelled mildly of pee.
“let's turn off all the light's/and see if you/glow in the dark”, Bumping Uglies
it was silent except for the hum of our human structures and music
All italics from Melanie Westerberg’s blog. All [ ] bracketed text from Melanie’s story ‘Sheds’ in the Austin Chronicle.
Posted by Amber DiPietra at 5:09 PM