I did not will my small body into a sharp javelin and bore through his skull thus pinning him to the back of the hard plastic bus seat. as I wished to do. so that he would stop. saying those things to my friend

--suggesting what she might do with her  limbs and tongue. but I believed I could have done this if I needed to.
why I even entertained the idea that my friend and I should get off the bus (when that man could have followed us) or why I even thought for a minute that we should stay on the bus and ignore his words for 15 more blocks, I don’t know. while the tall, imposing frat guys in the ironed jeans and button up shirts that were sitting right between us and this man, well—they got quiet. quit saying HBS—Harvard Business School apparently—every fucking other sentence and were trying to not to look at us, trying not to show their politically incorrect pissed faces, delaying them as we were, with having called the whole bus to a halt by summoning the po-po. I don’t know.  I wanted to go empty and vacant, that was my first response and I wanted to avoid pissing off a larger number of people, which seems like a dumb weak impulse.
I took out my cell phone, pointed it at him at the man still saying “cunt” and I told him he could get off now or I was calling the police. then i yelled to the driver to stop the bus because I had 911 on the phone. and while we waited on the police, some colossal tool wearing a very twee coat and skinny jeans and an ipod got up and started shaming my friend for having stopped the bus just because she was offended. and I did not lunge across the aisle and gnaw his face off like a rabid little zombie dressed in my best Day of the Dead frock. but my friend got real loud, about how hard his life most certainly was in his Urban Outfitters get-up and when was last the time he got attacked on the street? and such. and he shut up, then turned to the bus driver and like a crazed little bat, raised his sinewy wings and started photographing the driver—one of my favorites on the 49 line, an older Asian man. bat boy was shrieking “I am taking your picture to report you for stopping this bus just because those women are hysterical!’
the man finally split before the police arrived. frat boys decided to speak up, oh so helpfully, at this point, by bellowing, “all right, he’s gone, let’s get this bus moving.”.. we got to our stop, my friend and I thanked the driver and stepped off the bus, just in time to see two Russian trannies, striding by calmly on this hot night, drinking tall boys. we laughed and sort of clung to each other and kind of cried and made a lot of whoopy feathery noises.
thinking about what a tremendously good kickboxer my friend would make, certainly a better strategy as my teeth and sharpened head would not last long. all of this after a night watching kindly yogi bicyclists and metal workers play Twister in a giant warehouse off of 20th. 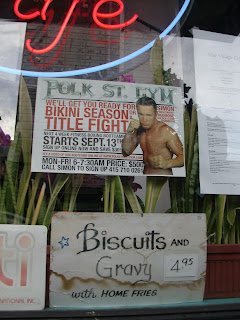 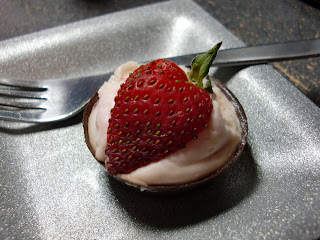 Posted by Amber DiPietra at 1:46 AM