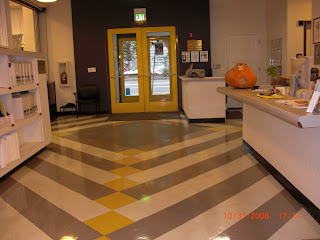 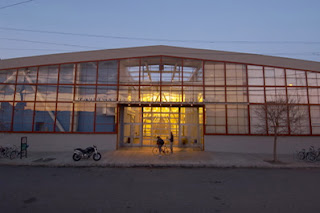 GK Callahan, the social practice artist who has been making elaborate beaded creations and fanciful wind chimes out of old silverware with the blind seniors at work (the LightHouse for the Blind) for the last couple years, recently got a grant to use that trashy, overgrown lot next to the SF Arts Commission, across from City Hall and just next door to the LightHouse. He and the LightHouse community going to grow organic vegetables, plant a sensory garden (think wildly textured plants and varied smells, make a giant mosaic along the wall of the alley that leads to the space, and host an installation from Kota Ezawa's sculpture undergrads at the California College of the Arts. The students are going to make a light sculpture, that takes into account the visually impaired visitor to the garden and most likely, relies on their communal efforts to create the piece.
On Monday night, I got to accompany GK and Theresa Navarro to CCA. Theresa works with Project Insight--a division of SF Parks and Rec, designed so that blind kids can get outdoors and be involved in the usual Park and Rec type offerings for kids. (To her immense surprise, there was a huge poster on display in the CCA nave, showing the Project Insights greenhouse  in Golden Gate Park, with the bench that CCA furniture students had designed for the site.) Charles Blackwell came along with some of his paintings in tow. Charles is a blind jazz musician, poet and playwright, originally from Alabama. Charles work is kind of like light sculpture in entropy (jazz musicians sloughing color in crazed movements, sharp loose strokes for kinetic form which is, I think, what is easiest for Charles to actually see).
Kota had invited GK and co. to come hear the proposals that his students had prepared for their potential installations in the LightHouse garden. I am grateful to GK and Theresa--who is helping GK do the tremendous amount of bureaucratic stuff he needs to do to get this project off the ground--for inviting me along. They remembered that I got my MFA at CCA and felt like I should be part of the discussion/review of the proposals.
The students were amazing. I was intensely jealous of both them and Kota--wishing I could do CCA over again, be a social practice artist, work more closely with the Art and Public Life program. (This is a principle reason why i have started Write To Connect--a growing impulse to make my writing more like social practice art.)
I had expected to feel a little bit othered in the class on Monday night, a little of that sense of, "Let's be nice to blind people and make cool art about blind people, because that would be a nice thing to do", but there was none of that. Each student's proposal had so much integrity, as in, there was such a desire to understand the community they were working with. And I definitely felt that they were feeling the With. One kid handed out an 11x17 mock-up of his design and said sheepishly, "I know it needed to be large print, but this was the best I could do with this layout." I almost cried. It was just a black and white outline, some sketches of stylized gates with rope and blocks of text arranged around that, but it was such clean crisp text and the print, while not quite being large enough, was substantially larger than any class handouts I ever received at CCA. At the time I was there, it had not occurred to me that I needed more definition like this--and here, it was handed to me.
One particularly impressive thing was the choice GK made in bringing with him the paperwork from the City's contract. He plopped it on the table and basically said, "here is social practice art". The contract has crazy clauses--wherein GK must return the land to the City in its original condition after the project is complete. So, tear up the garden and the sculptures and re-introduce the hypodermic needles and plastic bags? The students pored over the thick document with real interest, starting their own side conversations by pointing out certain bits of building code to each other, as if they were studying pigments. When I went to CCA, I would've been terrified by such legalese, by such a documents relationship to an art project I had to pull off. I thought it was brilliant of GK to bring that layer of the process into the classroom. It made it less odious, more interesting. The document was dog-eared and marked up--already re-made by GK's relationship to it. He is very dyslexic.
And we were sort of tough with the students. I said, "It's nice if you want to get folks to help you make clay letters--but what does that mean to someone who has never seen letters?" and, "I love the idea of the fountain, but the Helen Keller water legend resonates with that in a kind of corny way." No one was offended by this, the students were so engaged and so honest about how they had constructed their ideas and how they could dismantle them and recombine them. It was terribly beautiful. Charles was thrilled by scale models that he could totally follow with his fingers--and a giant sail that one of the kids in the class had scored from--some nautical dump? I don't know--but it's swarthy texture, illuminated by an LED sheet, an almost iridescent weave.
The final choice for the sculpture installation is up to GK, Kota and the class--but I know whatever they decide will be wonderful.
Posted by Amber DiPietra at 4:07 AM