I came here to move.

I came here to dance

I move In public

I am moving here

I thank you here

we are the movement

we are the dance

I sing the body electric*

This is the poem that Neil Marcus performed on Monday at the SF ADA anniversary. Reminded me not so much of Walt himself, but of Whitman in Ginsberg’s grocery store poem. Kind of. Mostly because of those first free moments doing ordinary things, after I moved to SF and could take myself places—Cala in the rain (which I said was Ginsberg's supermarket), TenderNob, broke down mobility scooter heavy with brown bags, yogurt cup rolled down the hill, I didn’t care. A kind of singing, that doing.

The way Neil delivered the hellos made for great call and response. Folks hello-ed back in different timbres, radical phonemes for different voices. Neil's dystonic voice loud and distinct. (Oooh Neil, what if you got a pedal and a loop and did sound art with soem of your stuff....I am sayign this because I want to do it...!) A way of giving props to the ‘is’ and the ‘here’ of being disabled and fully embodied. The strong, complex but basic isness, like a work of art (a famous quote by Neil, "Disability is an art--an ingenious way of living") that gets distorted in triumphalist narratives and left out/not highlighted in service rhetoric. Best of all, a call and response that people in the audience could participate in different ways. James and I just started laughing, like when you laugh at a concert because you are so into it.

Later, the wheelchair rider painter dude I met asked me what I did, after I told him I was a kind of an artist too (and thus, could not at the moment, afford one of his paintings). "Oh cool, lay it on me", he said, when I answered that I was a poet. Ad then I had to be all sort of, well you know I am kind of a page poet, which felt good to have a label as an out, but also felt kind of "lame" as they say. I'll have to work on what I can deliver. 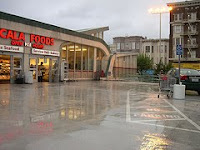 [*Also, for me, the poem gave new life to the time in high school when--4’6, 70lbs—would stand in narrow space between bed and TV in the room my mom and her boyfriend slept in—because that was the TV room—and do my exercises to The Body Electric—a bad public access show that had been syndicated. Florid lavender light, big perm, the woman seemed too much like the PT’s from the Wing (handicapped kids zone back in elementary school). She was more blissed out though, less lipstick, gentler. Dan, the boyfriend, would walk by and say something like “Aerobics, Hamburger Head?”; (he called my mother Hamburger Helper. Mortifying. I thought I hated him. He smelled like beer. That was a year going away to college, at which I discovered beer made me more limber than PBS exercises. And that was pre-brain cancer for Dan. Once, when I came home on break, I made an effort to have mature and kind conversation with him, he had lost his hair and did not speak very well by then. We were eating brown rice for dinner. I asked something banal about how he was feeling. He kind of grunted, but then said “I’ve heard you’ve been sick”. He grinned—his reference to a recent 3am call from my dorm to my mom, me worried I was dying after finishing a six-pack. I’m saving that one to tell my brother—Dan’s his father—maybe when he’s gotten past the dangerous beyond his underage drinking phase.]