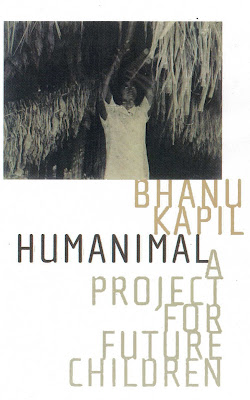 Humanimal, A Project for Future Children

In this new prose document, Bhanu Kapil follows a film crew to the Bengal jungle to re-encounter the true account of two girls found living with wolves in 1921. Taking as its source text the diary of the missionary who strove to rehabilitate these orphans—through language instruction and forcible correction of supinated limbs—Humanimal functions as a healing mutation for three bodies and a companion poiesis for future physiologies. Through wolfgirls Kamala and Amala, there is a grafting: what scars down into the feral opens out also into the fierce, into a remembrance of Kapil’s father who survived a brutal childhood in rural to become the headmaster of in Southall, Middlesex. The humanimal text becomes one in which personal and postcolonial histories cross a wilderness to form supported metabiology. “Lucidly, holographically, your heart pulsed in the air next to your body; then my eyes clicked the photo into place. Future child, in the time you lived in, your arms always itched and flaked. To write this, the memoir of your body, I slip my arms into the sleeves of your shirt. I slip my arms into yours, to become four-limbed.”

Bhanu Kapil has written three full-length prose/poetry works: The Vertical Interrogation of Strangers (Kelsey Street Press, 2001), Incubation: a space for monsters (Leon Works, 2006), and Humanimal, a Project for Future Children (Kelsey Street Press, 2009). Born in the to Indian parents, Bhanu lives in , where she teaches in The Jack Kerouac School of Disembodied Poetics at . She also maintains a blog, devoted to quotidian and hybrid behaviors of all kinds.www.jackkerouacispunjabi.blogspot.com

What are the limits of cruelty in what passes for love or civilization? The implications of even asking these and other questions are fully explored in this startling and informative text. Bhanu Kapil’s artful combination of documentary, poetic and narrative genres into an anatomy of human wildness is absorbing. This book is compassionate and savage; a physical act, filled with risks and satisfactions. “Each feral moment is valuable.”

In the famous story of the “Bengali wolf girls”—Kamala and Amala, found running wild in 1921 and “recuperated” to Indian society—poet and novelist Bhanu Kapil has found her ideal subject. To recreate a vanished era of colonial rigidity, Kapil travelled to Midnapure with a camera crew, and revisited the sites of the girls’ capture and torturous domestication. Can one reach back through time? Can one move forward after such horror? If you stick a girl in a dress, can you eradicate her animal?

Posted by Amber DiPietra at 7:53 PM