Everyman and AVA: strange bedfellows on my reading table.

"Now, the most effective form known to man, for bringing his consciousness in line with his own mortal limits, is tragedy. The most effective form known to man, for bringing his consciousness out of line with his own mortal limits, is advertising. Growing old in an age of mass marketing, with all its many confusions regarding age and youth, has created a new genre of writing, part tragedy and part sports-sedan advertisement, of which Everyman is a prime example. (Hence the critical confusion over the book: Its champions can point to its bleakness, its detractors to the silliness of its preoccupation with sex.) Roth sometimes appears to be in total control of his material, as when, near the end of the book his protagonist, now a man in his late 70s, encounters a woman jogging on the boardwalk near his Jersey retirement home. He stops her, is delighted to find she herself is in advertising (!) and no stranger to the hoaxy come-on: She provocatively encourages his flirtatious advances. He feels an erection growing in his trousers, then adds, "And feeling, too, that sharp sense of individualization, of sublime singularity, that marks a fresh sexual encounter or love affair and that is the opposite of the deadening depersonalization of serious illness." http://www.slate.com/id/2141059/


Meanwhile, Carole Maso composes a text filled with silences and repeated notes, though none the less concerned with weaving the web of the textual body between the poles of sex and death. While I love it and everything it proposes about the body and writing and being conscious, while it is an achievement over the sprots sedan, I have to say it oftentimtes scrolls away into Merchnat Ivory idylls. One wants more of the banal to believe in it (which is to say, touch it like skin) and use it to test one's weight against--I could buy it wholesale for insatnce if three-packs of cotton underwear at Ross and falling asleep on a bare mattress came in there somewhere between Beaujolais and Venice. Still, it is beautiful. 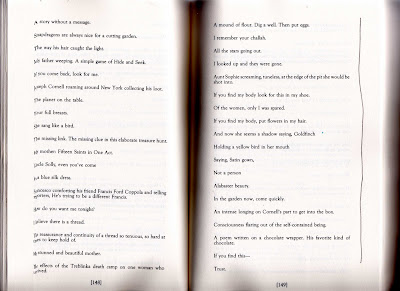 Posted by Amber DiPietra at 3:05 AM

Labels: document, my projects and writings